Let’s start with amorphous materials. There are generally two kinds of materials that people come into contact with in daily life: one is crystalline material, and the other is amorphous material. The so-called crystalline material means that the atomic arrangement inside the material follows a certain law. On the contrary, if the internal atomic arrangement is in an irregular state, it is an amorphous material, and a general metal, whose internal atomic arrangement is ordered, belongs to a crystalline material. Scientists have found that when metals are melted, the atoms inside are in an active state. Once the metal begins to cool, the atoms will slowly and orderly arrange according to a certain crystalline law as the temperature drops, forming a crystal. If the cooling process is fast, the atoms are solidified before they can rearrange, thus producing an amorphous alloy. The preparation of amorphous alloys is a rapid solidification process. The high-temperature molten steel in the molten state is sprayed onto a cooling roll that rotates at a high speed. The molten steel is rapidly cooled at a speed of millions of degrees per second, and the molten steel at 1300 °C is lowered to below 200 °C in only one thousandth of a second, forming an amorphous strip. 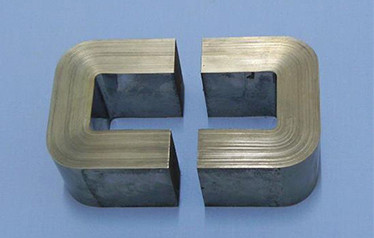 Compared with crystalline alloys, amorphous alloys have undergone significant changes in physical, chemical and mechanical properties. Taking the iron-based amorphous alloy as an example, it has the characteristics of high saturation magnetic induction and low loss. Due to such characteristics, amorphous alloy materials have broad application space in many fields such as electronics, aviation, aerospace, machinery, and microelectronics. For example, in the aerospace field, the power supply, equipment weight can be reduced, and the payload can be increased. Used in civil power and electronic equipment, it can greatly reduce the size of the power supply, improve the efficiency, and enhance the anti-interference ability. The miniature iron core can be widely used in the transformer in the integrated service digital network ISDN. Amorphous strips are used to make sensor tags for anti-theft systems in supermarkets and libraries. The magical effect of amorphous alloys has broad market prospects.